Chatting whith a fisherman: how my "ethnographic" research started


It was 2014. I was presented with the possibility to participate in a potentially soon-to-start research project. The idea was to conduct a study on the social capital in the Costa Viola area. This experience has contributed, among other things, to shed important light on the fact that, indeed, while people, that is what economists call “human resources”,  are indeed a fundamental ingredient for the success in local development, they cannot and should not be treated like any other “asset” in a production process. To me, it is an “invaluable value”, the essence of humanity. Very human and no capital at all!
It was thus that my contacts with the fishermen started one year before the Stretto FLAG project were launched by the University and sponsored by the FLAG. That project eventually took place and I participated in it. We got an article out of it published on Procedia - Social and Behavioral Sciences.

... But going back to that first encounter, somebody had told me that I would found unfriendly people, not willing or not used to communicate with “strangers”, and instead… it was enough that I showed a real interest, a “human touch” I would dare say, towards their stories and their life with the sea, as well as their struggle with the hard job of being fisherman, to completely debunk such rumours.

I was on vacation at a location in Costa Viola, and imagined that, if the core of the research was to be an understanding of what in the end we called relational capital,
I should have started by exploring how much they were open to share their experiences.

What popped-up in my mind…

That day, at the Tonnara, I carried my camera and approached a fisherman. His complete openness sparked in me the idea to tape our chats, no matter what would happen with the project. Later I filmed more videos. Those stories are, today, the core of a small editorial project of my own, just born.

«And if you take me off the sea, would you say it’s a nice thing?»

My history with the fishermen begins at la Tonnara. I have no words to describe what I feel every time I see it. I only know that seeing the fishermen’s huts on the beach, where they use to stay until late at night, almost as if they will never leave, soothes my mind and my body. It is a whole.
Antonino was the first encounter, of warmth and Human Beauty.

Following you can find that encounter that is part of a longer movie which includes more interviews. For now only this section has subtitles.

Labels: Me at a glance 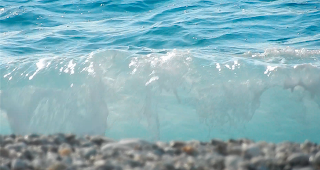 Monica Palladino
My ID card states it, I’m a Researcher! I have a doctoral degree in Agricultural Economics and Policy. Over time I have been involved in local development studies on local development partnerships, fishing communities, traditional food products and gastronomy tourism, investigating social structures through the use of networks (SNA). But, what lies behind a social network? What does development exactly mean? And how local development could be promoted? In looking for answers, I have engaged in field research following my instinct, meeting people and talking to them. Currently, my interests are directed towards the naturalistic inquiry approach, qualitative and visual research methods, which contain tools useful for doing research in a different way; something that goes beyond words and numbers and that, I instinctively discovered, depends on the ability to get "humanly" in touch with the others.